With a number of injury problems, we have selected our Six Nations England Team?

It’s hard not to envy Eddie Jones, with the money, the dream job, it all seems to be rosey for Eddie, but that is not the case. Not that it’s a bad problem to have, well, with injuries like they have faced it could be; but Eddie faces the situation of choosing his side to defend their well deserved Six Nations trophy. England have undoubtable depth within their squad and I can only imagine how hard it is for Eddie, so we had a go at picking our Six Nations England side…

1-      Joe Marler is in to replace Mako Vunipola as the 25 year old prop is out with a knee injury which was picked up late last year. Although, Marler is no downgrade, as he was neck and neck with Mako to snatch up the position prior to the injury; both players have experience with Joe appearing for his national side 46 times, proving his worth within the England set up. There is also a third option in the form of Matt Mullen, which is good news for Eddie as Marler is also now in slight doubt in terms of the Six nations as he has picked up a calf injury playing for ‘Quins.

2- Dylan Hartley still stands strong as captain down to his natural leadership and his performance to lead England to Six Nations victory last year. Despite his well reported disciplinary issues he is likely to start as captain although Jamie George is knocking on the door with some impressive performances for Saracens this season.

3- The 29 year old Dan Cole will reach his 70th England cap this Six Nations with Kyle Sinckler hot on his heels. The prop has had 6 years experience in the national set up with 69 caps to his name.

4- Joe Launchbury is no stranger to his national side and the coaches surrounding it, as he is racking up the appearances as the months go by under Eddie Jones and also in his time with Stuart Lancaster, proving that his talent isn’t just in the eager eyes of Eddie’s but is in fact clear to the Rugby community as a whole. He is coming back from injury but is set to be fit to face England’s opponents with a full bill of health. Although, he is not alone in striving for the number 4, as Courtney Lawes is also looking to slide into the position. Either way, Jones has got it covered.

5- Lawes is not only going for a shirt against Joe, but he is also looking to snatch George Kruis’ place at 5. Kruis who is also recovering from injury is not stopping to look over his shoulder as he strives to improve on last years top performance in the same series and assist England to a second consecutive Six Nations trophy, which is highly possible.

6-  No matter what part of Rugby you come from, you will have heard of the youngster who we placed in at 6, Maro Itoje. The blooming star is shaping up to be one of the best players going, with every aspect of his game improving as he gains that much needed experience on both club and national level. When he burst onto the England scene last year he made every coach and player stop in amazement as to the potential he holds. Having less than a year in the national squad, he has already got 7 matches and 6 starts, showing that Eddie sees something special in the youngster. The big question is whether he can move seamlessly between the second row and back row of the team.

7-  James Haskell retains his place in the team if he recovers from a head injury; he looks to add another trophy to his already impressive credentials. It is unarguable that he has deserved his place for the tour; adding needed experience and strength to the side which has recently been battered by injury scares.

8-  In to replace the injured Billy Vunipola is Wasps man Nathan Hughes, who is relatively new to the side but is still offering nothing less than quality performances. Hughes who has only 3 caps for England last played on national level in December in England’s 37-21 win over Australia; playing a good game which has kept his name on the sheet for the this years first test. If his lack of international experience is bothering you, he has more than enough experience for Wasps, but will it prepare him for his first full tournament under Eddie? 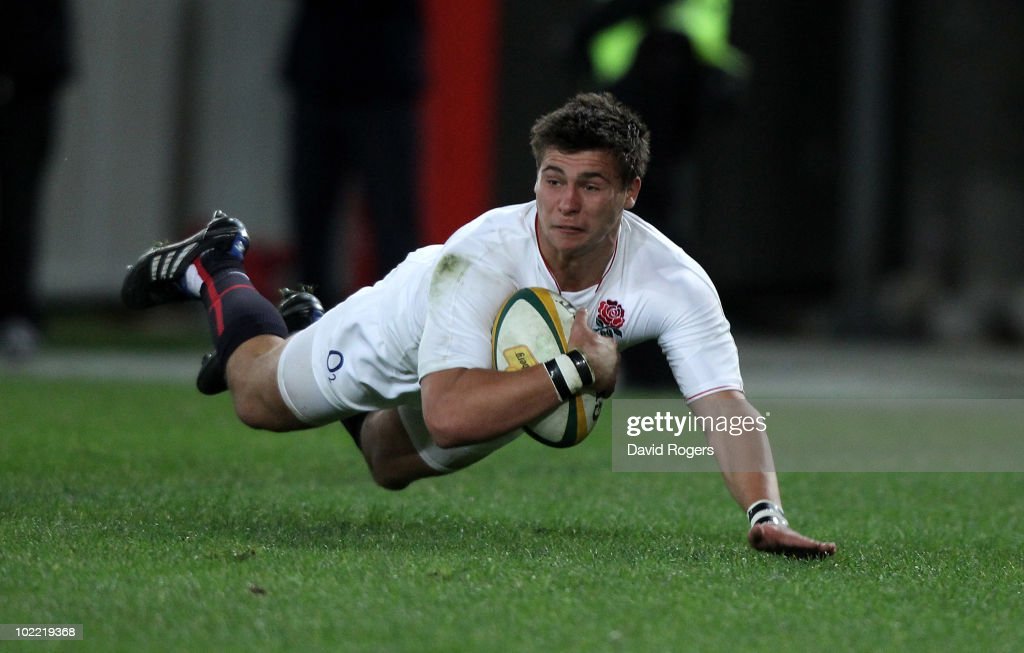 9- Number 9 is where Eddie could face one of his biggest decisions as both Ben Youngs and Danny Care are available for the tour, meaning we could see changes between the two over the series. Although, Ben Youngs takes the prize of being the first option with Danny Care on the sidelines raring to go if need be. Both options have both skill and experience in abundance, leaving the number 9 spot occupied for this years Six Nations competition.

10- The 10 spot will not shock you as George Ford seems to have re-found his form. His professionalism, eagerness to play to the best of his ability and consistent performances will put any England fans’ mind at ease. Farrell can of course slot into this position if needed.

11- Jonny May is holding off Jack Nowell to win his place at 11. May who has impressed many whilst in an England has started all of his 22 appearances with his national side showing he is a trusted member of the team. May performances in the Autumn international will have only boosted his standing in the national set up

12- Having been shortlisted for World Rugby Player of the year, it is no surprise we have chosen to keep Farrell at 12 alongside Ford, who have come up through the England age groups together. Farrell’s impressive kicking statistics and coolness under pressure, potentially puts him as first name on the team sheet followed closely by Mario Itoje.

13- Although a natural 12, there is more chance of Tuilagi displacing Joseph to the top spot for 13, but Joseph clinches the place with his array of quality throughout the season for club and country, Bath greatly value Joseph and it’s no wonder why with his solidity in the centre and his ability to get the ball over the try-line when it comes to it. England face no worries here with strength both on and off-field.

14-  Another trustworthy name in at 14 with Anthony Watson, who has started 23 out of 24 appearances for England at just the age of 22, showing all England supporters that he has potential to become one of the worlds best wingers. Along with his top displays, he can also score tries, which is proven by his ratio of one try every two games, and this could be useful for England throughout the Six Nations

15-  Finally, one of England’s most prolific players over the past couple of seasons in the form of Mike Brown and the exciting Elliot Daly battle it out for the 15 shirt. Both are premium players with bundles of skill to offer, but Brown beats Daly to it down to experience, and with the England sides’ injury troubles, experience is much needed. Daly is likely to be an attacking option on the bench for Eddie Jones as he can take up a number of positions in the back line. We do not believe the red card in his last appearance for the national side will hamper his chance of selection.

Do you agree with our selection? Or are there players you feel we have missed?